WikiFest BLN, as was its working name, turned out to be a great event. :)


Afterwards I have to say that this was the perfect occasion to combine some things I love: Open Source, music and Berlin.

Actually I now wonder, if this could be the direction for my blog to go...
... or probably I will just blog what I like in the moment I do it - just as we did at WikiFest. :)

On the last day we decided that WikiFest _is_ BLN and we can drop that addition. Actually I think that Berlin is the only city that can provide for a thing as a WikiFest, a real life wiki, where happens what people contribute. Berlin is the city that is world famous for doing that since the fall of the wall - they just never called it a wiki. Let's keep that spirit for WikiFests as long as the city still allows for it. :)

Next year's WikiFest will be from


note these dates down and be sure to there or be square... ;)

This happened actually already last week and I hoped it to happen the week before, but better late than never and it also gets dated back to the 1st of July 2010.

I am now officially an entrepreneur with german government funding. And the plan is "Tiki Farm Cloud Hosting World Domination" That sums it all up and still fits in a tweet - neat, huh? :)

So, lot's of stuff happened in between. Let me tell you how it happened that I was offline for a couple of days. Some people (including my parents) thought that I'm dead because my cell phone battery ran out... sorry for that! :)


I was very surprisingly at a festival, got the legal side of my business all sorted out, made new friends and had my first extended couchsurfing experience...
... so again not much happened actually.. ;)

Yeah, that was a really excellent time I had there at MELT! Festival - I just went there without any ticket or much anything and then I just walked into the festival. You've ever seen Derren Brown? That's what came to my mind when I approached the security guy checking my wrist band. I used my former wristbands from other events for paying like with paper. The security guy even checked my wristband physically and still let me pass. Check this out for seeing what I mean: Derren Brown - "Paying with Paper" ;)

And on the next day the guys from Liverpool, who got me into going there in the first place, found a ticket lying on the ground and decided to give it to me, so I may just be the "luckiest guy of the world". Oh, and I got the label of "unwakeable". ;)

I slept somewhere on the grass most of the time, people even had to leave me lying there because they couldn't wake me after the party was over, but I got a pretty good tan now - you wouldn't have thought that of a geek! ;)

The next two days were then spent CouchSurfing. First one of the friends from Liverpool stayed at my place, then we went around the city for sightseeing with another fellow couchsurfer. Very relaxed and beautiful two days.

A nice tour around the city in which we by the way also got to the c-base in which we will have TikiFestBLN2010 as it turned out. Stay tuned for more information about "WikiDev feat. TikiWiki, DokuWiki, WikiPedia" or whatever we'll call it - I'd still like WikiFest. ;)

A very good weekend with very nice people - thank you all again for everything! :) 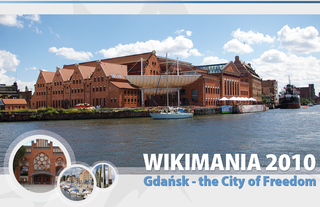 I came back from WikiMania 2010 in Gdansk just yesterday and have to say that it was a much tougher weekend than I expected.


Butterflying was not so easy this time as in Porto. Most of the time I felt too heavy to really fly, but I had an awesome time. Met many old friends again and made some new, so actually the butterflying worked out rather well... ;)

Though it's kinda weird to go to Gdansk to meet DokuWiki and WikiPedia people from Berlin who are eager to come to TikiFestBerlin2010 to make it a real WikiFest. But well, that's how it works - the WikiWay! :)

Parties always had a very good mood to them, were not always too well organized it seems, consisted mostly of techno music and sometimes we just found them in touristy bars. Common problem everywhere was that it was just tooooo hot.

The only thing you can really do in such temperatures was then provided by my newly found local guide on monday: going to the beach with the longest wooden pier in europe and have a siesta. A very relaxed final day with some more not so touristy sightseeing and nice help along my way home.

I tried, I really tried to use Ubuntu and Kubuntu. Just after the first exitement I had to come back to the conclusion that it just sucks!


I'm running Gentoo now again and my laptop is faster, more usable, better tuned, easier to maintain and just much more sympathic. Ubuntu stood more in my way than it did anything else. I can't take an operating system seriously that is constantly thrashing on the harddisk like that's its major purpose in life. I do have a rather powerful machine and on Gentoo it's perfectly ok to not own a SSD.

There are just not thousands of applications installed that I rarely or never use - but which eat resources all the time. Now I'm lacking nothing, but my laptop uses about 6 Watts less power - that's more than a third! If Ubuntu wouldn't have messed with my laptop battery, I'd now have the promised five hours of battery runtime for my machine. Well, it's still four now.. ;)

Also I now decided to "do it right"TM and build a totally streamlined, lean and mean working machine. No Gnome dependencies, no sucking KDE4, just XFCE and Compiz. And I don't even run ACPId or anything - everything is done via UDev/HAL and I'm looking forward to next UDev versions that will make HAL deprecated. Then there are running only a handful of system services.

A good and stressfree life. :)